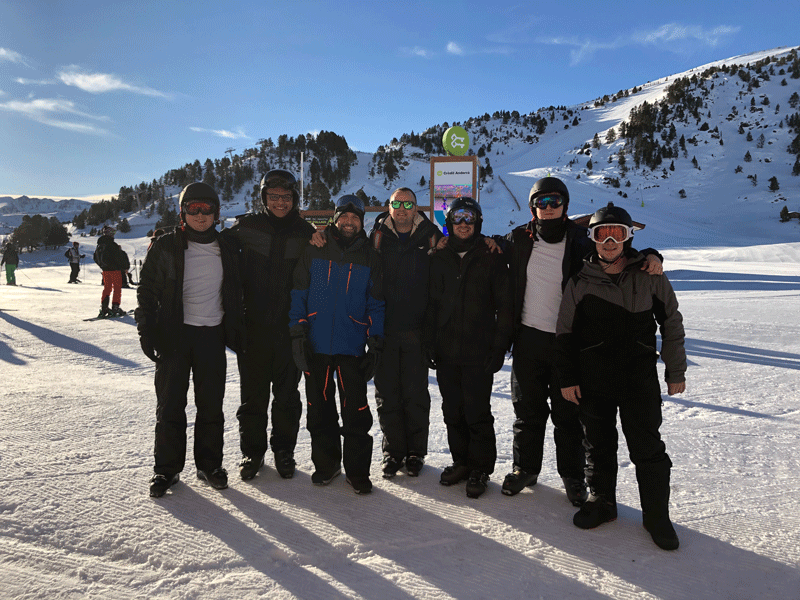 This year at WestSpring we really wanted to celebrate our successful year with our team, after all it is them that made it all possible. So, we planned a Skiing trip to Andorra!

The trip started on Friday 13th, bit of an ominous day to go flying we know! But we started off well with the end of year team meeting in the office, looking at how far we have come this year and what we are planning for 2020, but in all honestly most of the time was spent preparing snacks for the trip. Things took a slight turn for the worse when we took off from Bristol, within 30min of take-off we were turning around as someone was feeling unwell on the flight. It took us 2 hours to take-off again, but we did eventually land in Toulouse.

We then had a 2-hour bus ride over to Andorra; the guys were getting stuck into 20Q and other random games but it wasn’t long before we were stopped by the breath-taking views as we came into Andorra. If you ever get the opportunity we would highly recommend going even if you aren’t the least bit interested in skiing, as the views and the scenery really are spectacular.

When we finally reached the resort and dropped everything in our rooms it was nearly 10pm, so we headed out for a quick pizza, with the more adventurous members of the team extending the night out in town. In the morning it was obvious which members of the team were still recovering from their antics the night before, (George fell asleep at the table). After breakfast it was time to head to the hills!

So, some of the team hadn’t been skiing before so went off for a 3-hour crash course with an instructor, we hear that Harry fell over a LOT! However, they were up to speed quickly and met back up with everyone after lunch, it was then a full afternoon skiing before a big team meal out in the evening.

On Sunday it was a full day skiing with a couple of sketchy moments, George coming off his snowboard and nearly getting concussed and Elliott flying down the hill way too quickly and smashing into one of the chair lifts, resulting in a really angry Spanish operator dragging him off and giving him a talking to, which Elliott didn’t understand a word of. But in all honestly everyone was fine, and the skiing was amazing, jack even ventured onto a black slope. We all agreed it was an incredible experience.

In the evening we were then back on the bus and pretty much slept the entire way back to the airport, a quick burger and we were back on the plane to Bristol. Rounding up, the trip was amazing; it was genuinely brilliant to spend some time with the team out of work and Andorra certainly wasn’t a bad place to do it. Roll on 2020 and next year’s trip!