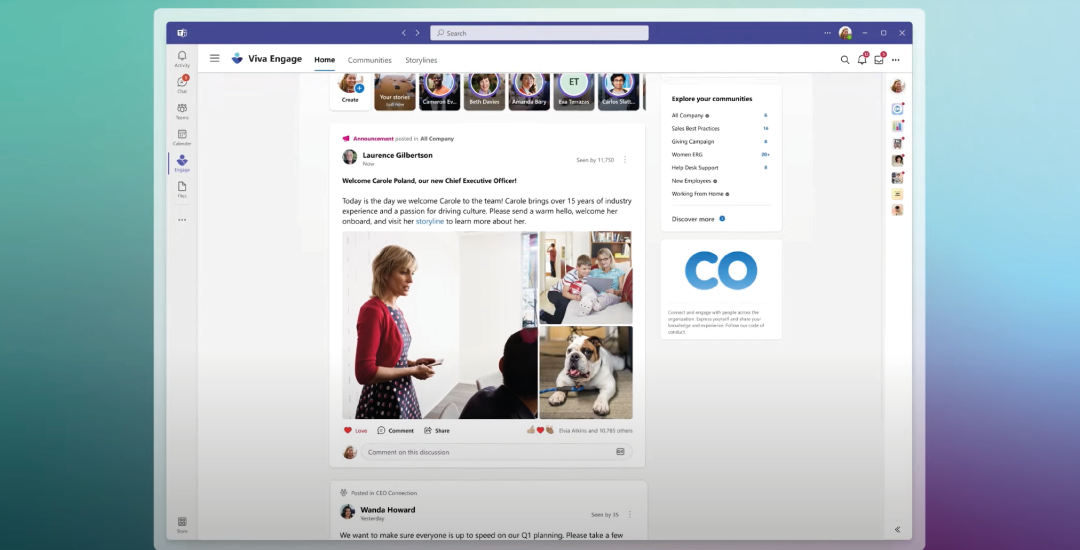 Remember Yammer? Microsoft purchased this social sharing, community platform 10 years ago in an attempt to establish a company based social network. Now over a decade later we see the launch of Microsoft Viva Engage, a Facebook lookalike coming soon to Microsoft 365.

If you’re relatively new to the world of work you’ve probably never heard of Yammer. Yammer looked like how Facebook did in the early stages. It was a community for your company where you could write status updates, create and join groups and even had an instant messaging feature similar to Facebook Messenger. For many though it never quite took off, and now Microsoft have revamped it to Viva Engage. “Viva Engage is a social app for digital communities, conversations, and self-expression tools”  “to connect employees and empower everybody to contribute and express themselves by meeting people where they are in Microsoft Teams and Microsoft 365.”1 As you can see in the below screenshot, Viva Engage has taken inspiration from a number of Facebook’s features and UI. With Viva Engage you have a ‘storyline’ where you can share video stories just like on Facebook and Instagram. You can also post to a traditional user feed uploading content and tagging users. Viva Engage wherever you are

Viva Engage will sit as an application within Microsoft Teams and builds on the existing capabilities of the Communities app you may already be familiar with. Being part of Microsoft Teams you can easily access Viva Engage from your finger tips using the Teams mobile apps for iOS and Android.

You can find out more about Microsoft Viva Engage here or if you’re yet to jump on the Microsoft 365 bandwagon then speak to us today to find out how you can work smarter not harder.